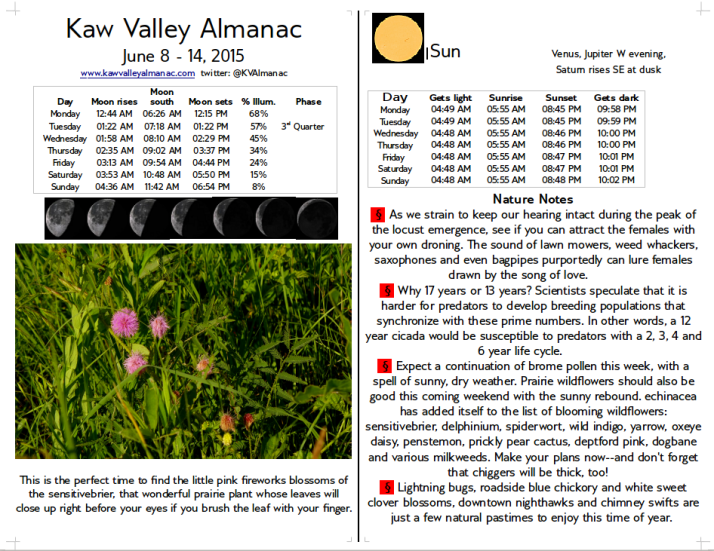 If you like the weekly posts of Kaw Valley Almanac, you might be interested in purchasing a compilation of these kinds of posts that Ken Lassman has put together into a book, along with essays on the land and the ecosystems of the area. This book was designed not to be just another coffee table book full of pictures; rather it was designed to be used as a guide to accompany you when you take your treks outdoors to observe nature first hand. You can get this book at a number of local bookstores or order it here for $15 + $2 shipping (regular price: $20). Click here to purchase your copy via Paypal.

Ken Lassman has been keeping this almanac for over a decade, He invites you to share your observations and photos in the comments section. You can find his book Wild Douglas County at The Raven Bookstore and The Community Mercantile in Lawrence.

The Osages commemorate the keystone species of the prairie, the bison, for its mating season, which used to be one of the greatest spectacles found in North America. The book The Osages has descriptions of the titanic battles between competing bulls and how they would plow up large areas of prairie sod as they pushed each other aroound. Read that and you’ll understand why the Osage clled this the Bufffalo Mating Moon.

This month is a time when many songbirds molt, or lose their colorful feathers that helped attract a mate in the spring. It is a time when many gooseberries are ripe in the woods, when warm season grasses shoot up tall and wildflowers grow taller to compete for the sun. Cicadas sing during the day, with damelflies and dragonflies eating mosquitoes while dodging the watchful eye of the bullfrog. At night, katydids begin their song while lightning bugs stitch across yards, meadows and fields.

Thunderstorms seem to lose their way, appearing, moving and disappearing almost at random this time of year, causing flash flooding at one spot while leaving nearby areas dry. A wet road at night can host steamy fog and fast jumping frogs crossing the pavement, while moonlit nights can bring out many a nocturnal animal beating the heat of the day. If the moon isn’t bright, take a look at the milky way that the summer so nicely showcases, including the constellation Sagittarius in the south, which looks like a teapot outline in the sky but holds the center of our galaxy.

Get your own Almanac delivered!